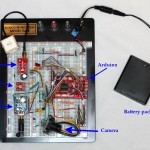 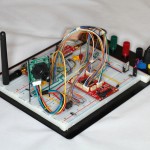 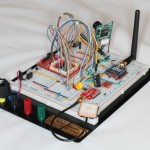 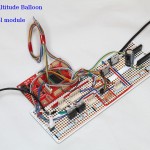 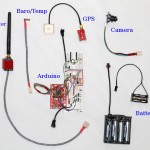 Venus GPS with GPS antenna tracks 14 satellites while consuming as little power as three LED’s. I set it to output two NMEA sentences ($GPGGA and $GPRMC) at 1Hz rate.

TinyGPS library for Arduino does a nice job parsing NMEA output from this GPS.

BMP085 sensor measures air pressure and temperature. It will track altitude and ascent/descent status in case of GPS malfunction.

Sensor requires quite some code to interface with; I used this and this examples to query the sensor and convert its readings to altitude and temperature values.

Adafruit camera will provide real-time photo stream. I set the camera to take 640×480 (0.3 megapixel) photos, and each JPEG file is about 50KB in size.

Camera sits on a separate voltage regulator that Arduino can turn on and off. I used Adafruit library to interface with the camera, but modified it to make it work asynchronously.

To transmit telemetry and imagery, I chose long-range XBee module. It operates at 900MHz frequency with maximum 250mW output power, which should be sufficient for 10 miles line-of-sight range. With high-gain antennas the range should double.

There are too kinds of long-range XBee’s: high-speed / low sensitivity and low-speed / high sensitivity. To maximize the range, I’m going with latter one. Data transfer speed will be 10kbps – each JPEG will take about a minute to download. I’ll get a faster radio when NASA approves my budget 🙂

A few words on flow control. Since all packets are broadcast twice, effective rate will be half of available 10kbps bandwidth. XBee serial speed is set accordingly to 4800bps. XBee has internal 336-byte buffer and will raise CTS pin when the buffer fills up to 208 bytes – i.e. 128  free bytes remain. Arduino will use matching 128-byte transmit buffer and transmit data only when space is available in both its own and XBee’s buffers.

Arduino is programmed with ~1,000-line code that implements the following: